When you think of male Pop wedding artists, I am sure a few that come to mind include Ed Sheeran, Bruno Mars, and James TW.  However, having an artist’s song filling your wedding venue that is unique to any wedding or has a special place in your hearts makes for the ultimate combination during any wedding.  I would like to introduce the newly released (May 15, 2020) wedding song “Call the Preacher” to you and the artist behind the song – Brian Walker. 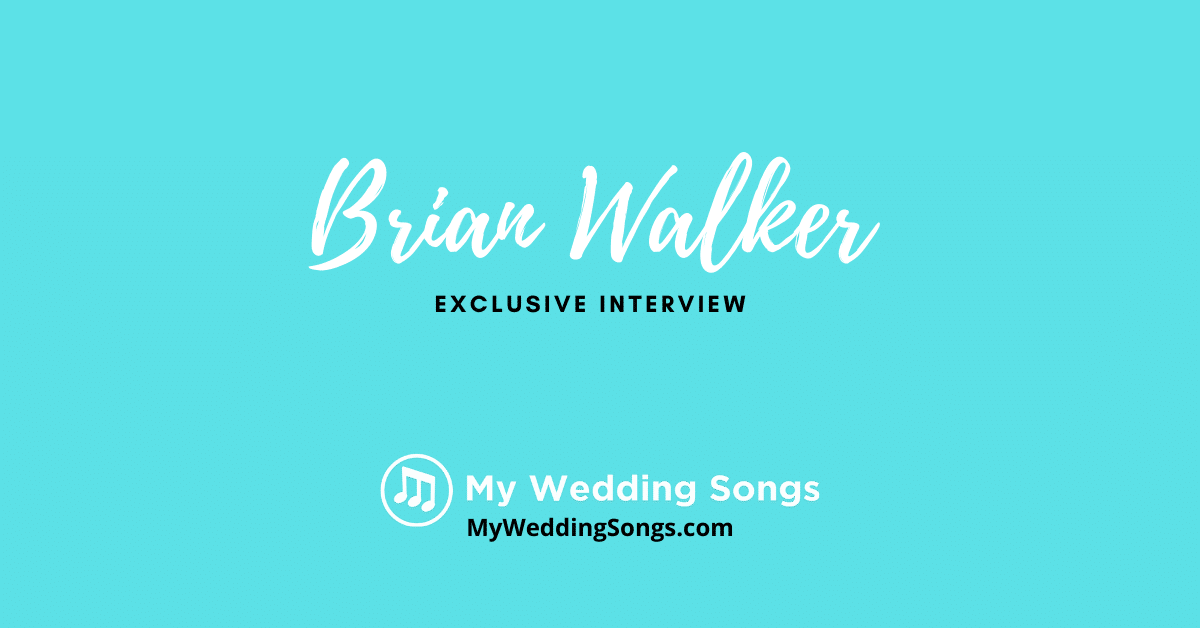 When did you discover your musical talent?

I started playing piano at the age of 5. I would hear songs on the radio, and I’d try to replicate them on the piano by ear. Using this method of learning music, I used to play songs on the piano for my class in elementary school. It wasn’t until I got into college however, that I really started to get into singing, playing the guitar, songwriting, and then eventually music production and mixing.

Who are a few of the musicians that influence you and why?

I try to stay as eclectic as possible with my musical tastes because I like to just take in as much music as possible, and then come up with something new and different every time I write. I do really like pop music. I always watched the VH1 Top 20 Music Video Countdown as a kid and thought those music videos were so cool. I listen to the radio a lot as well. I get bored really easily, so I think that’s why I like pop music.

There’s always ear candy in the production, and all this constant evolving over the course of the track to keep a listener interested. If I had to narrow it down, I think Alicia Keys has an amazing voice, and I like her vibe. I’m inspired by innovators, like The Beatles, and Billie and Finneas Eilish, and I appreciate some of the great pop writers and producers of the past and present, like Ryan Tedder, Max Martin, Benny Blanco, etc.

For your new song “Call the Preacher”, what is the story behind the song?

I wrote the song after my brother got married; I was his best man. Sometimes when you’re working on music full time it’s so involved and all-encompassing, that life starts to speed past you, and you don’t realize what you’re missing. Being the best man at his wedding gave me a longing feeling, that I wanted that same companionship that he had found. The core emotion of the song came from those feelings. Once I wrote the song and made the beat, I worked with Grammy Award winner Prince Charles Alexander to tighten up some of the lyrics and bring the mix to a more professional level.

That initial idea or feeling that sparks the creation of a song is often the easier part, but the painstaking work of rewriting weak lyrics and melodies, finding the perfect kick drum sample, making sure all the levels and reverbs are correct, etc, are what really make the difference in the overall quality of the recording. Having Prince Charles involved with some of those decisions definitely helped to bring the recording to the next level.

You can purchase the song on Amazon here:

You were the best man at your brother’s wedding. Would you offer any wedding advice for couples planning their wedding?

My advice for anyone who is the best man would just be to really prepare for your speech. It shouldn’t be too long or too short, a couple of inside jokes are okay, but if you tell all inside jokes then the rest of the crowd will be confused; you wanna play to your audience. Share a few funny stories that everyone can relate to, and keep it tight and compact. For couples, I would just say double-check the guest list, and don’t leave anyone out 🙂 And be safe at your bachelor/bachelorette parties 😉

If you were to create a playlist for your car today, who would be some of the artists? Would there be any surprises?

I actually have a playlist on my Spotify channel called “Brian Walker Selects” that I update with all of my favorite songs. Here’s a link to it.

I tend to gravitate towards moody/dark pop songs or sultry R&B songs. I think dark love songs are really cool. I love hearing the unexpected in a pop song. “End this (L.O.V.E.)” by Hailee Steinfeld is probably my favorite song right now. I think Hailee’s vocal performance is great, the chords have a cool vibe, and the way the producer pitch-bended her voice on “L-O-V-E love love” is so simple and amazing.

“Say So” by Doja Cat is a bop; that’s definitely one that I’ve been playing a lot. Kehlani just put out a new album; I think she has an amazing tone to her voice and a really cool vibe. This song “Ocean Waves” by Alaina Castillo was one I had on repeat for a while; more of a moody pop song.  A lot of the songs I listen to are moodier, which is very different from “Call the Preacher”. And that’s part of the reason why I wrote: “Call the Preacher” as well. A lot of my other songs are darker, so I wanted to have something a bit more poppy, optimistic, and fun.

Do you have an artist you would like to collaborate with?

There are so many singers, producers, writers, etc I would love to collaborate with. I love collaborations because when a song does well you get to share the success and joy of the song with everyone involved with it. Also, if you stay open-minded, your collaborators can pull you in a direction you might not have gone on your own, so you can get something that feels very different from the rest of your catalog of songs. Zendaya put out a song called “All for Us” that was this really dark love song, and I thought it had an awesome vibe. All of her songs have this pop/R&B dark love vibe to them, kind of like a longing feeling rather than all sunshine and rainbows, so I’d love to make something like that with her.

Selena Gomez has an awesome tone to her voice, and she’s someone I’d like to sing a song with. I really liked Hailee Steinfeld’s new EP; it felt innovative and different from her older stuff. I think it would be cool to make an innovative/experimental pop song like that with her. Taylor Swift would be dope to work with. I’d wanna make something with her that was a little less bright and more R&B, kinda like her track “I Don’t Wanna Live Forever” that she did with Zayn. She’d be cool to work with cause she has great pop melody writing skills as well.

And then there’s super producer/writers like Max Martin, Benny Blanco, Ryan Tedder, etc who have written and produced so many hit songs. I’ve been to a couple of OneRepublic concerts, and Ryan’s one of the biggest influences on the way I sing today. I’m always trying to push my voice higher and lighter cause I love those types of tones and that type of control in a voice. So, all of those people I would like to work with, and more!! If time travel was possible I bet Beethoven and I could make something crazy too 😉

What advice would you give to other musicians?

Have a vision for where you want to be, and just grind away at it every day until you get there. If you want to be a pop artist, it’s so much more than just being a good singer. You have to write, produce, promote your music, practice for the live show, work on your brand and your website, network and build connections, stay in shape (if you chose to), work on the technical skills of your instrument, etc, unless your lucky enough to find a team of people to delegate some of those tasks too (which I haven’t yet!). The big thing I would say is just taking control of your career and make it happen for yourself, rather than waiting for somebody else to discover you.

What’s next for you in your music career?

So, “Call the Preacher” is my fifth official single (not including the remix I did for “Remember 17?”). I have a new song coming out on June 12 that I think will be a fun, kinda sultry dance song, and then I have three more songs that are all mastered, and I’m aiming to release one song per month this year. I also have a couple of collaborative songs in progress with a producer-artist and two girl singers, that I think will be really cool. When all the songs are out, I’m going to compile them into my first album.

Then I’m gonna get to work on the second and third albums. I have a lot of creative energy inside me, so I can’t wait to wrap this album up and unleash that energy into my next one. I’m also very excited to see what people think of these songs that I’ve been working on for the past couple of years. I have a couple of songs that I’ll be releasing this fall that I think are my best records to date and the best representation of me as an artist.

I love all the songs I’ve created because I spend months working on them and refining them, and every song is rooted in a real emotion that I was feeling at my time of writing the song. Everyone has different tastes and the songs are so different from each other. I’ve played the unreleased records for some of my friends and family members, and everyone likes a different one!! So I’m curious to see which ones the rest of the public gravitate towards more. “Call the Preacher” has been a favorite among some of my friends and family members. But I’ve been saving the songs that I’m personally most passionate about for last, and I’m SOO excited for everyone to finally hear them 🙂

If you want to stay up to date with Brian Walker’s upcoming releases, you can follow him on Spotify -or- YouTube.

Enjoy the Offical lyric video for “Call the Preacher”