Kelly Clarkson Wedding Songs For Special Moments Like This


Kelly Clarkson has become one of the most admired female vocalists of her generation. She turned her victory on American Idol into a pop career that has lasted almost 20 years. Her stage presence and vocal ability make Kelly Clarkson a performer that defies any attempt to be contained within a specific genre of music.

Kelly Clarkson was one of the contestants on the original season of American Idol. She won the competition, and Clarkson went on to chart numerous pop hits. She is arguably the biggest star ever produced by the iconic talent show.

Clarkson hails from Texas. As a high school student, she performed with her school’s drama team in various musicals. Her vocal abilities gained her scholarship offers from three major schools, one being the Berklee College of Music. Clarkson passed on all the offers and chose to pursue her own path forward.

The initial efforts by Kelly Clarkson to secure a record deal were unsuccessful. She chose to audition for the first season of American Idol, and the rest is history. Clarkson has sold 25 million records worldwide. She has also hosted her own television show and been a judge on The Voice, another popular talent show. 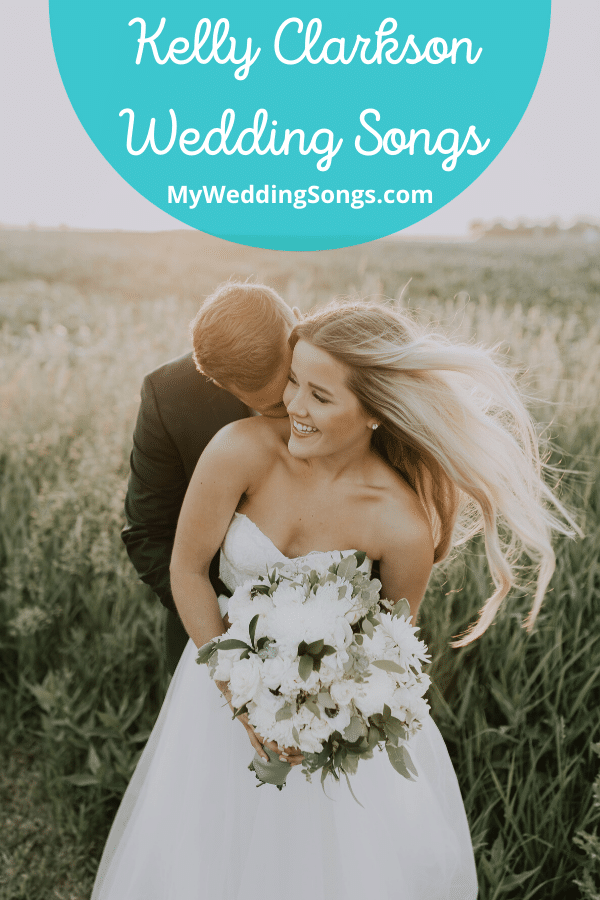 Most of the music from Kelly Clarkson’s catalog is upbeat, pop fare that can be used for dancing. Many of the best Kelly Clarkson wedding songs are ones that you will want to add to the reception playlist. A few others on this list may be suitable for your formal wedding ceremony.

This is one of the most tender songs that has ever been recorded by Kelly Clarkson, and it has become a popular wedding song choice for millennials who grew up listening to her music. This is one of the rare songs in her catalog that can be worked into a formal setting at your wedding.

Kelly Clarkson sings here about the kind of love that every couple dreams of, a tender and caring partnership that will last throughout the years. Most couples chose to use this song as their first dance at the reception, but it can also be played before the ceremony begins.

The Trouble With Love Is
2003, Thankful

The title of this song should not mislead couples who are thinking about adding it to their wedding song choices. It has meaningful lyrics that all guests will appreciate, and it is also a very nice dance tune.

Before Your Love
2003, Thankful

We should always choose some music pieces that let a spouse know how they have impacted our lives and made it better, and that is the message of this Kelly Clarkson hit. You should think about dedicating it to your partner with a special toast at the wedding reception.

My Life Would Suck Without You
2009, All I Ever Wanted

There is nothing wrong with song lyrics that are a little blunt, and this song proclaims its message in the simplest of terms. The bride might want to think about singing the song for her new husband with the help of the wedding band or a karaoke track.

A wedding day is a celebration of fulfillment, of finding the one person that you cannot make it without. Let them know that they are everything to you when you surprise them with this song as the wedding party is taking up their places at the altar.

Of course, your spouse loves you, and you can use this hit from Kelly Clarkson to affirm that very thing. It would be a good song to accompany the first dance, but it can also be appropriate to play at the send-off when the wedding day is done.

This song showcases the raw emotion that Kelly Clarkson is capable of bringing to her music recordings, and it also speaks of loving someone despite all of their imperfections. Most brides will want this song played at the wedding reception.

Kelly Clarkson was in the midst of her own breakaway when she recorded this song, a final collaboration with music mogul Clive Davis. The song is about coming out of one’s personal shell to become something amazing, and most newlyweds feel like their chosen partner helps them to do that.

Play this song at your wedding to pause and reflect on how amazing it is for two people to find one another in this crazy world. This is another Kelly Clarkson hit that can be added to the formal parts of a wedding celebration.

A wedding is a chance to proclaim your everlasting love to the entire world, and this song will help establish the right mood when played for your entrance to the wedding reception. You could also use the song to create a wonderful wedding moment when lighting your unity candle.

Loving someone honestly and truly is the theme of this song, and its lyrics are very direct in describing the need for couples to communicate with one another in truth. Save the song for a moment at the wedding reception when you want everyone to pay attention to the message you are trying to send with your music choices.

The groom knows this already about his bride, and now she can let all of the wedding guests know it when she has this song played as a dance tune. It is a fun Kelly Clarkson wedding song choice that will encourage everyone to get on their feet and dance.

Here are a few more female artists and their wedding song lists: