One Direction (and Solo) Love Songs for Weddings


One Direction can rightfully claim to be one of the most successful boy bands in history. At the heart of One Direction’s success are pop love ballads. Many couples have chosen to include the best One Direction love songs at their weddings.

One Direction came into existence in 2010. The group was composed of Harry Styles, Niall Horan, Liam Payne, Louis Tomlinson, and Zayn Malik. After being eliminated from the UK’s version of The X Factor, Malik would return with the other four young men to perform as a group. Given the name One Direction, the group finished 3rd in the popular televised talent contest.

Simon Cowell was quick to sign One Direction to a lucrative record deal. The band released five albums for Cowell’s Syco Records. All were massive hits. One Direction was aided in its climb to fame by a strong social media following.

Malik left the band in 2015, but the other performers continued for another year. Each member of One Direction has gone on to have a solo career, with Harry Styles and Niall Horan achieving the most success. One Direction will forever have a place among the stars of British pop. 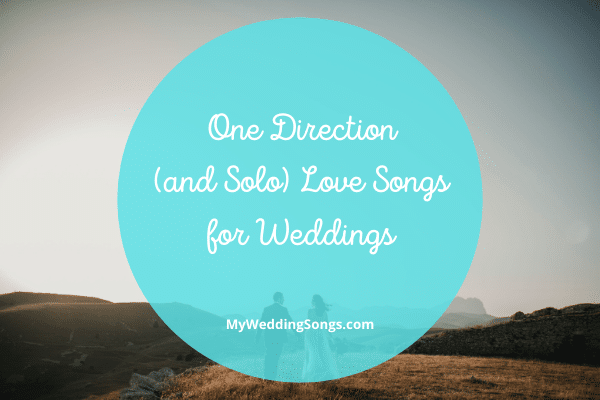 The Best One Direction Wedding Songs

If you were to explore videos for One Direction on YouTube, you will see how many couples have chosen the band’s music for wedding playlists. This is because One Direction has many love songs and ballads in its catalog.

On this list of the most popular One Direction wedding songs, you will find selections from the band as well as its individual members. There are One Direction love songs that can be used for the traditional wedding ceremony and the wedding reception.

My Wedding Songs is reader-supported.  As an Amazon Associate, we earn from qualifying purchases.

And if you like going places we can’t even pronounce
If you like to do whatever you’ve been dreaming about
Baby, you’re perfect

Every couple enters into a marriage believing that they have found the perfect partner, and this song from One Direction honors that feeling. This is a good song to play before the wedding ceremony begins, and it helps to set the right tone.

Not even the Gods above
Can separate the two of us
No, nothing can come between
You and I

This song from the Midnight Memories album in 2013 featuring Harry Styles, and it has been chosen by many modern couples as a wedding song. It can be played as a part of the processional before the bride makes her grand entrance.

I have loved you since we were 18
Long before we both thought the same thing
To be loved, to be in love
All I can do is say that these arms were made for holding you
I wanna love like you made me feel
When we were 18

This is a song that celebrates the beauty of young love and the rites of passage to adulthood, and it can be a great choice for the first dance between newlyweds. The song has the pop vibe that One Direction is known for, so save it for the reception so that all can enjoy it.

What Makes You Beautiful
2011, Up All Night

So many One Direction love ballads are expressions of love from a man to a woman, and this one is meant to honor her beauty in song. Many grooms like to have this song played just before the bride enters the wedding chapel, but it can also be used as an interlude while the unity candle is being lit.

There are many unique ways to feature this One Direction song at your wedding, and it brings the sentiment and emotions that are important elements as you prepare to say your vows. Creative couples have chosen to play the song before the groom is allowed to kiss the bride, but it can also be used in a more subtle manner.

What a feeling to be right here beside you now
Holding you in my arms
When the air ran out and we both started running wild
The sky fell down
But you’ve got stars, they’re in your eyes

This song comes from the 2015 Made in the A.M. album, and it was co-written by Liam Payne and Louis Tomlinson. You should include songs like this at your wedding because they embrace the magical nature of a moment you will never forget.

This One Direction love song is a poetic expression of all the things about your partner that make you feel special, and you should use it on your wedding day to remind your new spouse how important they are. Try dedicating this song to your partner at the reception, or save it for a special dance.

The person that you have chosen to marry is one who inspires you to reach the highest peaks, and this song will let them know how you truly feel. Honor the influence of your partner and play this for a wedding dance tune.

Your wedding day will take you to new heights of emotion, and this song will make you wish you could fly on the positive feelings and love of the day.

Finding your forever means sharing your last first kiss, and what better song choice for a wedding could there be than this One Direction classic. Take a moment and have the song played just before the groom is allowed to kiss the bride, or allow the newlyweds a special moment with it as a dance selection.

Harry Styles was certainly the breakout star of One Direction, lending his voice to the lead parts on many of the group’s biggest hits. This is a song that was meant to honor the perfection of a bride on her special day, and it should be dedicated to her at the reception dinner.

Niall Horan was one of the most popular members of One Direction, and this is perhaps the biggest hit from his solo career. It speaks of how two people in a romantic partnership complete one another, and many brides have walked the aisle as the song is played. Plus, check out the acoustic version (stripped as it’s called) of this song too!

This song was featured in the film Fifty Shades Freed, and it is a love ballad about devotion and commitment. The song is often used for the all-important first dance between newlyweds, but it also works well as a send-off song at the end of your wedding day.

This song was covered by Zayn Malik and Zhavia Ward for the live-action version of Aladdin, and it makes a great song for introducing the married couple to the wedding guests. It has also be played as a first dance as a married couple.

It’s been a minute since I called you
Just to hear the answerphone
Yeah, I know that you won’t get this
But I’ll leave a message so I’m not alone

Louis Tomlinson was a primary songwriter for One Direction, but his contributions to the group are sometimes overlooked. In this song, he shows off his vocal skills, and also the ability to craft emotionally-powerful song lyrics. It is a dedication to his Mother. If you are looking for a memorial song for your Mother, this song is a gem.

Put A Little Love On Me (Niall Horan)
2020, Heartbreak Weather

Niall scored a huge solo hit with this love song, and it is used by young couples as an addition to the wedding reception playlist. Have fun with the song, and allow everyone to revel in its pop beat.

Weddings are about making an eternal promise, and you need songs that have a theme of devotion. This Harry Styles solo tune is the right song to play for one of those wedding day moments that starts the tears flowing.

If you have a favorite One Direction song not on our list, please share your song below so that we can add it!

The Do It Herself Bride

The Do It Herself Bride