Shania Twain Love Songs As Love Gets Me Every Time


Shania Twain can rightfully be called a goddess of country music, and she has also captured the hearts of pop fans with soulful love songs. Love is a theme that recurs throughout Shania Twain’s catalog of music. Here’s a list of some great Shania Twain love songs to add to your wedding playlist.

Shania Twain was born as Eileen Edwards in 1965. She hails from Windsor, Ontario, Canada. Twain has become one of the biggest musical artists from Canada, second only to Celine Dion in terms of sales. She has been praised for helping to create the country-pop genre of music.

Twain was discovered in Canada at an early age. She met and fell in love with rock music producer Mutt Lange. To this day Lange is given much credit for Twain’s early success. The two were later married and subsequently divorced.

Most of the music recorded by Shania Twain deals with love in some form. She is at her absolute best when singing about the glories of love. After a break in the early 2000s, Shania Twain hit the charts again in 2017 with a new album titled Now. 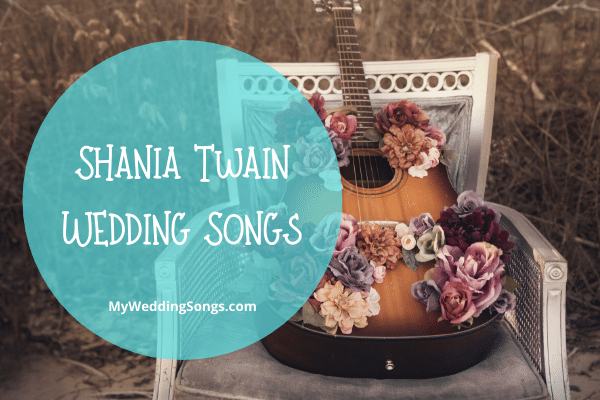 Those who want to use Shania Twain music at their wedding have many love songs to choose from. Twain has recorded many memorable wedding classics that appeal to couples in many age groups. Here is a list of the top Shania Twain wedding songs.

Love Gets Me Every Time
1997, Come On Over
There is no better feeling than true love, and it feels great knowing that true love is enough to help two people conquer the world. That is the message you will send to your wedding guests when the reception DJ plays Shania Twain singing one of her biggest hits.  This song could also be used as an upbeat recessional song.

You Win My Love
1995, The Woman in Me
Every groom should take some satisfaction in knowing he was able to win over the woman of his dreams, and this song is a reminder that he had what it took to capture her heart. Brides sometimes have this Shania Twain wedding song dedicated especially to the groom during the reception.

Endless Love
2012, Tuskegee
This duet with Lionel Richie was recorded for Richie’s Tuskegee country album, and many couples today think it is even more beautiful than the original version with Diana Ross. This song has been used in thousands of weddings for everything from the formal processional to the first dance between the marred couple.

Forever and For Always
2002, Up!
The message of this song is one of lifetime devotion, and its lyrics match up very well with the wedding vows. Some couples who choose to write their own wedding vows will play this song just before the solemn promises are made during the ceremony, but it is also played as the couple enters the wedding reception hall.

You Can’t Buy Love
2017, Now
Every wedding needs a few songs about the sincerity of true love, and few express this theme better than this Shania Twain classic hit. This is a good wedding song to let everyone know that your love transcends material things to touch the divine that rests in every soul.

You’re Still the One
1998, Come On Over
There are a few advantages to using this Shania Twain hit for a wedding song, and one is that other married couples in your wedding party will be able to relate to it. Someday you may find yourself playing this song at an anniversary celebration, or it can also be chosen for wedding vow renewals.

When You Kiss Me
2002, Up!
Can you still remember the first kiss from your significant other? Use this song from Shania Twain to remind your partner of that special moment when you add this tune to the wedding reception playlist.

From This Moment On
1997, Come On Over
This Shania Twain song has become one of the most popular wedding songs of all time, and it has been used by hundreds of couples that want to make their wedding recessional original. The best way to use this song is to play it as the bride walks down the aisle, and watch as everyone is moved to happy tears.

Any Man of Mine
1995, The Woman in Me
You can add a little bit of fun to your wedding reception when you have the DJ play this song, a Shania Twain classic that takes a fun look at married life. You can use the song to create a memorable social media moment when the bridal party line dances to it at the reception.

Man! I Feel Like A Woman
1997, Come On Over
A great bouquet toss song or ladies group dance song to play during the reception.

The Woman in Me (Needs the Man in You)
1995, The Woman in Me
The bride gets most of the attention on your wedding day, but you can give the groom his share by dedicating this song in his honor. Shania delivers an emotional vocal that will offer a poignant message to everyone in attendance.

You’ve Got a Way
1997, Come On Over
It can be hard to put love into words, especially when you are caught up in the emotions of your wedding day. Let Shania say it for you with this beautiful love ballad, a song that you can play as the bridal party is entering the wedding chapel.

Thank You Baby! (For Makin’ Someday Come So Soon)
2002, Up!
This song is meant to share a message of love that only the newlyweds can appreciate. For this reason, the song is most often used to introduce the new partners to the wedding guests.

Life’s About to Get Good
2017, Now
At your wedding, you are standing on the edge of a lifetime that can be filled with happy memories, and life truly is about to become amazing for you and your partner. Use this song to close out the day with a happy send-off that everyone at your wedding will remember.

We Got Something They Don’t
2017, Now
Getting married is a testimony to the fact that you have found something special, something that everyone longs for. Celebrate finding true love by playing this song as a dance tune at your wedding reception.

Who’s Gonna Be Your Girl?
2017, Now
Shania Twain is at her sassy best on this love song from her 2017 album, Now. The song is playful enough to be used as a wedding dance song, and it will also please longtime fans of the Canadian songbird.

Up!
2002, Up!
This was the title of Shania Twain’s fourth studio album, and the title song resonates with the optimism and hope that all couples want to feel on your wedding day. Most couples prefer to save this song for the end of the night as they depart into life together.

If you have a favorite Shania Twain love song not on our list, be sure to send us a message below so that we can add it.

Here are a couple of other songstress song lists to check out!